GRIMM: ARTISTS TAKE FIRST STEPS INTO THE WORLD OF CREATING IMPROV FOR CHILDREN

The Old Courts is much more than just a venue – We are an organisation who are passionate about inspiring the children in our community. We will help them gain confidence and a love of performance and help them take their first steps into a world of art and creativity whilst supporting local artists to be able to make great work for children and young people.

What is Grimm? Grimm is a brand-new show for children about Fairies, Goblins and well… you get to make up the rest. Blending traditional stories with ones the audience can shout out and make up themselves, Grimm is a gentle introduction to Improvisational theatre for kids and their grown-ups. Ian Hayles, one of the creative minds behind the project says “It is about imagination. Lots of imagination. In our world, Fairies are adults and Goblins are children. When you grow up and become a Fairy, you just do the rights things that are good and nice, and you forget your Goblin self. Your Goblin self is the naughty, subversive thing that can make up a fantastic story with Spider-Man and a jelly monster. A fairy would never write that story.” 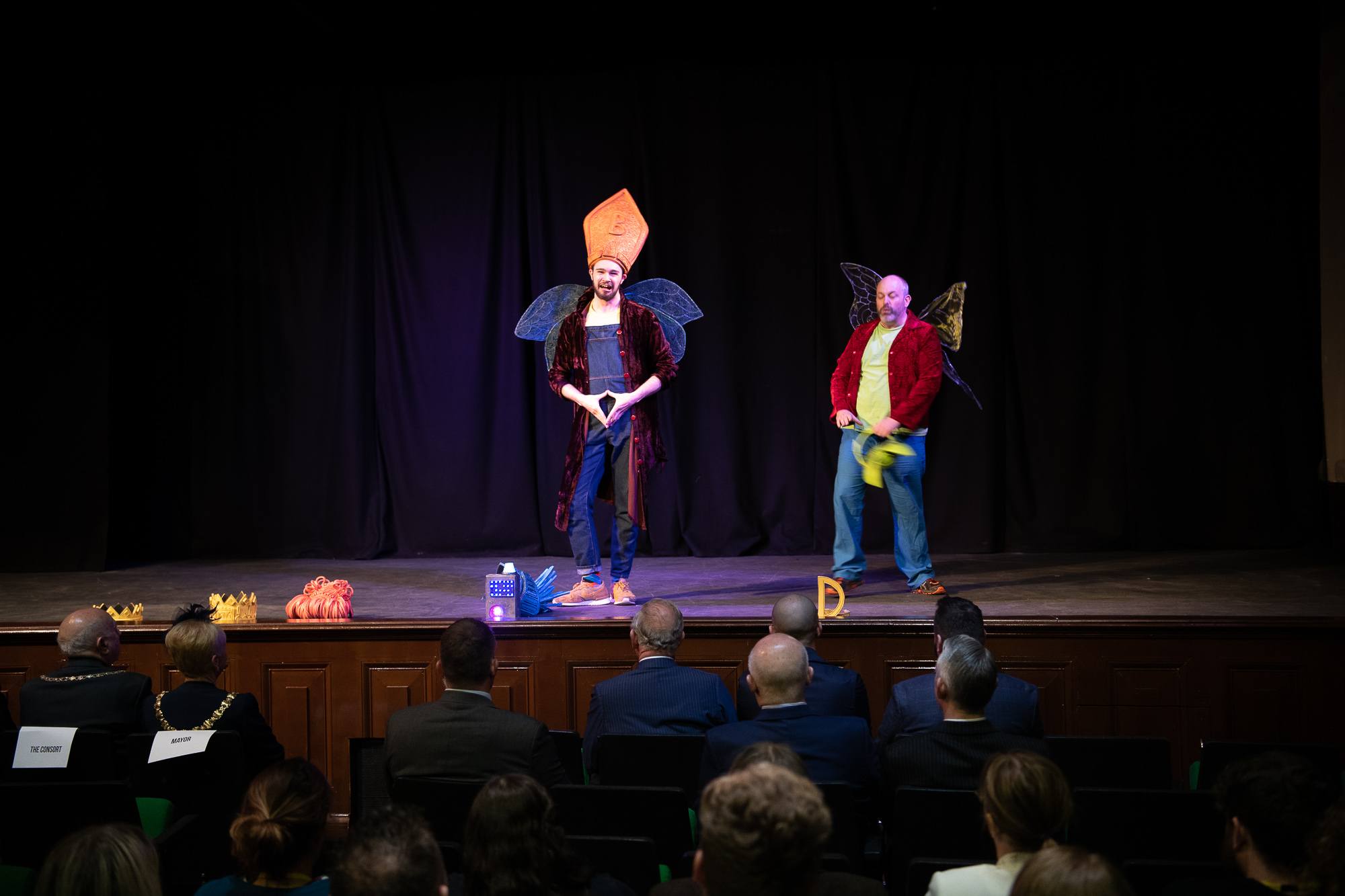 What Made an Improv Company Create A Show For children? Grimm is the brainchild of Ian Hayles, the Artistic Director of Casino Improv. Created two years ago as The Old Courts own in-house improvisational theatre troupe, Casino deliver improv classes for adults, regular performances at The Something New Show and have recently started their own show, Baillaugh.

Their style is anarchic, hilarious, and always utterly brilliant. They have spent the last two years developing and successfully hosting their shows, which up to now, have all been aimed at ages 18+.

Grimm is Casino Improv’s very first foray into the world of creating work for children and young people. So, why did they decide to take this step? Ian explained to us the idea behind Grimm:

“One of the reasons we made Grimm is that we are so passionate about improvisational theatre, but it’s actually quite hard to get improv to be considered a proper art form and more than just ‘that thing that happens in bars sometimes.’ It is much more than that. Children innately ‘get’ improv because they just do it all the time. Improv is play. It is actually us as adults who forget how to do that well. ”

Ian sees a pathway for children who first experience shows like Grimm as audience members then gaining the confidence and ability to participate in performance classes and groups. Only about 80% of the Grimm script will ever exist. The rest is made up by the audience on the spot. By encouraging children to play a part in the creation of their own story, Grimm empowers kids to keep on thinking, playing and making up their own long after the show has finished.

Ian and Casino share the same passion as The Old Courts: that people can feel able to interact with the art, rather than simply be passively entertained.

Performing for HRH Prince Charles and brand-new audiences: Audience Reactions On April 11th-13th 2019, Grimm was performed at The Old Courts in our Theatre. Each audience was a great mix of adults and children. Overall, 108 people viewed the performance, as well as 150 people who watched a special preview in which we were honoured by the presence of His Royal Highness, The Prince of Wales, who also watched the show.

Below are two quotes taken from some of the audience members:

“Took my 8yr old boy to see Grimm, he thoroughly enjoyed it and so did I. We laughed all the way through, and he loved being able to shout out and take part. Well done to the two actors on keeping the kids and adults engaged and entertained throughout.” –Lisa S (Trip Advisor, April 2019)

“A fantastic experience! I took my two grandchildren (4&7) to watch Grimm. It was a superb interactive experience. I had never heard of this venue before (and would suspect many more haven’t). I will look each time I have grandchildren to see if anything is on! Great value, very reasonable drinks and treats! We will return!” – car0lann47 (Trip Advisor, April 2019)

How did The Old Courts support this project? We have successfully supported Ian and Casino Improv develop The Something New Show and Bailaugh since 2017, and after several successful pantomimes here at The Old Courts, we approached Ian in 2019 with the prospect of developing an in-house pantomime. However, pantomimes take a whole crew of people to build and put on, so despite our best efforts, this just wasn’t feasible at the time. Instead, Ian proposed an improv-inspired panto-style show that could work year-round, and Grimm was born.

We were able to fully support Ian as he developed Grimm, offering him the rehearsal space he needed to perfect the show. For emerging artists like Casino Improv, we offer support and guidance, putting them in touch with people from whom they can get advice and an experienced view of where they one day hope to be. For example, we put Ian in touch with renowned children’s theatre company, Filskit, who we able to offer advice on developing and touring children and young people’s theatre across the country and allowed him to shadow one of their performances.

What’s next for Grimm?

“Taking the show forward, I want some other members of Casino Improv who are interested in performing for children to learn the parts. This show is going to be anything but stale. Whatever we can do to keep it alive and vibrant. Touring is something that we would love to do soon. I see these people with their shows, like Kaleidoscope [during Wigan Arts Festival] – it was lovely! And they tour that. How do they do that?”

The Old Courts will continue to support Casino Improv as they develop as an emerging improvisational theatre company.

We look forward to seeing Casino Improv work on a funding application for further research and development of Grimm and wraparound workshops for children.