Artists and communities install new artworks on Wigan’s King Street, as part of a nationwide arts and heritage project.

Over three years, the locally-rooted Streets Apart programme aims to celebrate the history of Wigan’s King Street, uncover its hidden stories, and kick start a period of cultural revival on this iconic street.

Streets Apart is commissioning locally and nationally based artists to work with community leaders and members of the public to co-create unique street art, outdoor performance and more on King Street, culminating in a celebratory festival for the whole community in Summer 2023.

In 2021, Streets Apart ran an open call out for artists locally and nationally to apply for a commission. The consortium selected the final artists after a two stage process. This process was supported by Leigh-based teenager Kayleigh Neal, who is a member of the Creative Activators, a group of 14-19 year olds helping to shake up the Wigan art scene; supported by Wigan Steam and Culture Unlocked (Wigan & Leigh’s Local Cultural Education Partnership).

As part of the first wave of commissioned projects, artists were commissioned to work alongside local creative partners and community groups, to co-create unique multi-artform projects on King Street.

This week sees the first in a series of public artworks which have been co-created through these commissions; with physical installations on King Street, the launch of digital artworks and a printed zine.

The on-street exhibits were installed on Thursday and are displayed in the old Taxi Office and Evolution Bar. Access to this was made possible thanks to business owners of both Ibiza Bar and Evolution Bar. People are encouraged to visit the sites and see the work.

The Streets Apart project aims to enable the people of Wigan to imagine a different future for King Street, through artist-and-community led projects. 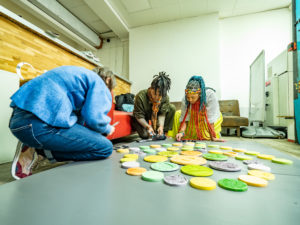 Rebecca May is an artist, designer, educator and partner/co-founder of social arts practice May Wild Studio – creating artworks challenging the conventions between visual art and traditional craft making. Rebecca collaborated with Miki Shika, founder of local CIC Ekhaya Empowerment, which aims to alleviate poverty amongst women from marginalised communities in the Wigan borough through empowerment, education and integration. Ekhaya supports lone-parent families with childcare, health and life coaching and community support. Rebecca and Miki worked with women from Ekhaya Empowerment, and local young photographer Haya Aref, to develop this artwork exploring themes of home and taking inspiration from the architectural and crafted features along King Street.

“Working together with The Old Courts & Ekhaya Empowerment to co-create the Wigan Streets Apart King St commission has been a truly creative & meaningful collective experience. Exploring themes of Wigan & Home, connecting to King Street’s heritage & craft, we have created a mural that responds creatively to all of these themes, a vibrant & tactile celebration of both Kings Street’s past and its future.”

Ciara Leeming is a photographer and writer, with more than 15 years experience as a freelance social affairs journalist. Ciara’s project had two key strands. The first invited members of the public to attend photo walks on King Street. Photographs taken by the public were annotated in workshops with memories of the street, and have been displayed as a photography exhibition and as an online ebook. Alongside this activity, Ciara also worked closely with The Brick, a charity that supports people experiencing homelessness, in poverty or facing debt crisis. Working with The Brick’s members, and Wigan-based graphic designer Amy Cecilia Leigh, Ciara co-created a printed and digital zine exploring relationships to King Street.

“It’s been a privilege to hear so many people’s experiences of King Street over the years.

People who attended my photo walks and annotated their images with their memories and personal narratives were passionate about the street’s grand and vibrant past and excited about its potential regeneration and future. Some of these images are displayed on vinyl panels on King Street – with many more in an ebook which can be downloaded for free.

I also worked with people who use the services of homeless charity The Brick to create a zine, In My Own Words, exploring their lived experiences on King Street and beyond. We used a range of creative approaches during our sessions to develop these first-person stories. Designer Amy Cecilia Leigh worked with me on both parts of the commission.

As we face recession and huge and terrifying projected rises in poverty, my time with the Brick has left me thinking a lot about who is permitted to inhabit public space. I hope King

Street thrives again but remains accessible and welcoming to all parts of the Wigan community.”

Julie McKiernan and Corrie Shelley specialise in turning local history, facts and people’s memories into stories and songs that engage, entertain, and inform. For their commission, Julie and Corrie are working alongside 8 members of the public with personal memories of King Street, 4 young people from Wigan Youth Zone and 8 members of local creative writing groups. Through workshops, intergenerational interviews and creative writing sessions, the artists and community members are developing people’s memories of the street into a new anthology of creative writing. Alongside this, Julie and Corrie’s project will include the creation of an original song and a photo poster exhibition, inspired by these memories and the street’s live entertainment and music hall heritage. The commission will culminate in a live performance event on King Street in Autumn 2022.

“Wigan Council are proud to be part of the Streets Apart consortia who are working with communities and local businesses to bring the heritage of King Street to life through creativity. The installation of Ciara and Rebecca’s artwork marks a wonderful moment in the project where we start to see the work developed with local residents, taking its place on the street.” – Lesley O’Halloran Director of Customer and Culture

Next for King Street

Streets Apart announces a new round of artist commissions, which will begin in October 2022. Confirmed artists creating new artworks with the local community in this round of commissions are; Louise Fazackerley, Northern Heart Films, Steve Fairclough and Andee Collard.

To keep track of these commissions as they develop, visit the Streets Apart page on The Old Courts website here.