John Pfumojena, The Old Courts and the Collaborative Touring Network Presents World Premiere of ‘Bunker of Zion’ at Wigan Pier

The Collaborative Touring Network (CTN) announces its partnership with artist John Pfumojena, for a new show titled Bunker of Zion that will premiere at the iconic Wigan Pier in Wigan on Thursday 26 May, followed by a national tour this summer.

CTN is a national collective of grassroots organisations, led by The Old Courts in Wigan, and based in areas across England where levels of arts investment and engagement are currently low compared to others. The network includes The Old Courts, Wigan, Doorstep Arts, Torbay, Lyrici Arts, Medway, Looping the Loop, Thanet, Jumped Up Theatre, Peterborough, Arcade, Scarborough and GL4, Gloucester.

Over two years, the network will collaborate with exceptional artists to develop and tour world-view-changing live performances, with the inclusion of local artists and communities at the heart of its activity.

This year, nine years into the work of this collection of creative organisations, CTN announces its partnership with Zimbabwean artist John Pfumojena. The collective will work with and support John and an ensemble of international performers and musicians to develop a live performance that draws on multidisciplinary art forms. 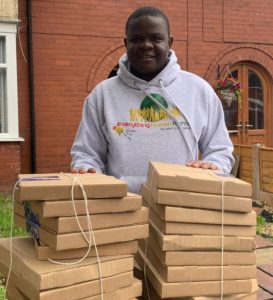 Farai Nhakaniso of Everything Human Rights standing in a grey hoodie with a stack of brown paper wrapped parcels.

ce performed in wellington boots, also referred to as gumboots). The stage show will premiere at the iconic Wigan Pier for an exclusive three nights, followed by a UK tour to the CTN partnering venues.

John Pfumojena will be partnering with Wigan Borough based charitable organisation Everything Human Rights, who exist to celebrate diversity in Wigan, encourage integration, and create an empowering environment where people can flourish, through positive participation in projects, activities and social events. Everything Human Rights’ project coordinator Farai Nhakaniso will work alongside fellow Wigan-based artists and community members, to develop their own creative response to Pfumojena’s work. Through a series of workshops and community events in April and May, Everything Human Rights will explore themes of diversity and togetherness, using dance, music, movement, spoken word and storytelling.

John Pfumojena – also known as John Falsetto in the music industry, is an experienced and expressive musician, performer, writer, and composer, and coincidentally, John Pfumojena and Farai Nhakaniso went to the same school in Zimbabwe and are now collaborating on this powerful show in Wigan.

Bunker of Zion is an hour-long show, set in a dystopia where music, culture and history are banned by those in charge. As a result, a small community creates a safe space in an underground bunker to continue enjoying the beautiful feeling that music gives them and a way to express how they feel. The show is created by John Pfumojena and his company of performers, with creative input and performances by Farai Nhakaniso, and Wiganers, supported by The Old Courts and the Collaborative Touring Network.

At the heart of the show there’s a strong Zimbabwean arts and culture influence, and audiences are invited into this world through the eyes and imagination of the artists.

This joyful, colourful, and energetic piece of work showcases the work of a cast made up of performers who specialise in dance, music and singing.

The production is scored by Zimbabwean Marimba and Mbira music, and various languages including Shona, Ndebele and Yoruba (from Nigeria) The aim is for communities to engage with this culture and share their own; contributing their own artistic ideas that will form part of the final performance. This piece of work aims to disrupt convention and focuses on the importance of places and communities embracing difference.

John Pfumojena said: “This collaboration really does what it says on the tin. Co-creating a show with the partners in the network, aided by an associate artist in each location, devised with community members. The Zimbabwe Mbira and Marimba instruments are the bedrock for this creative work, and we are asking every single person to come as they are and interact with their authentic selves. Zimbabwean Bantu Shona culture meets with myriad genres in dance, music, movement, spoken word and storytelling. Culture shaking hands. I’m truly excited to be leading this work in an opportunity provided by the Collaborative Touring Network. Surely this is how collaboration should work across the country and the world.”

Farai Nhakaniso said: “We are very excited to be partnering with John Pfumojena as the local Associate Artist for Wigan, as part of this Collaborative Touring Network project. This project, which will be drawing from Bantu/African multidisciplinary art forms, is giving Everything Human Rights’ Kubatana Dance Group and other locally based artists the opportunity to create something special for our borough together. This is going to be something not to be missed.”

The 3 nights of Bunker of Zion will exclusively be held in the iconic Wigan Pier building. Reopening for three nights only, this is a unique opportunity to visit the historic venue and to see the essential work that has been done before the venue officially reopens in the near future. The Old Courts are working in collaboration with Step Places on bringing Wigan Pier back to life for all to enjoy.

Made famous by George Orwell’s book, Wigan Pier is a wharf and a key feature of the coal mining heritage of Wigan. The buildings were extensively redeveloped into a museum and venue in the 1980s but was closed in 2007. Working in collaboration with Step Places, Wigan Council and Canals Rivers Trust, The Old Courts are transforming the iconic Wigan Pier into canal-side walkways, a food hall, an events venue, and cultural education spaces. The building is expected to reopen to the public in 2023.

The show developed by John and his ensemble, alongside Everything Human Rights and community members from across the borough, will have its world premiere in Wigan on Thursday 26 May and performed over 3 nights (Thursday 26 – Saturday 28 May). Tickets will be on sale from midday on Wednesday 20 April, in the meantime, anyone wanting more information about the show, workshops and the artists behind it can find out more via The Old Courts website and by signing up to The Old Courts mailing list.

Associate Artists based in each of the CTN partner locations will be working alongside John Pfumojena and the ensemble, in the same way Farai Nhakaniso is doing so for the Wigan version of the show. Collaborating with John and with their local community, Associate Artists will develop their own creative response to the work that will be incorporated into the show on tour in their location.

CTN is a lifelong, collective mission to do everything possible to make each of the towns and cities listed as part of this collaboration, a better place to be through arts and culture. The Collaborative Touring Network is supported using public funding from Arts Council England.